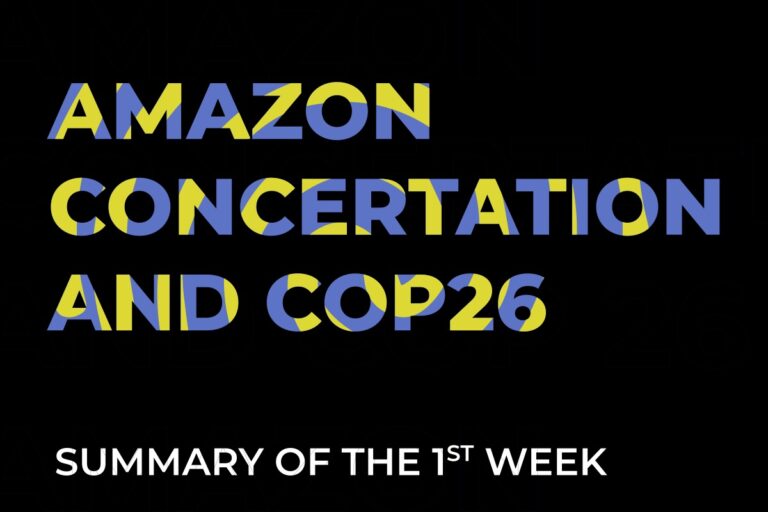 Broadcast live directly from COP 26, the November plenary session of the Amazon Concertation presented a summary of the first week of the event and an assessment of the perspectives for the final week of the Climate Summit.

Izabella Teixeira, advisor at the Brazilian Center for International Relations (CEBRI) and Fellow at Instituto Arapyaú, along with Ana Toni, Senior Fellow at CEBRI and Executive Director of the Institute for Climate and Society (iCS), both members of the Concertation, engaged in discussion with Samela Sateré-Mawé, communicator for the Articulation of Indigenous Peoples of Brazil (APIB).

They highlighted the maturity and growing participation of the Brazilian civil society, which came in more articulate and organized than in the previous COP editions, much like the subnational governments. In particular, the increase in indigenous participation and its appreciation by all participants was emphasized. Another very important point was Brazil’s adherence to all commitments being negotiated at COP, such as the Declaration on Forests, the Global Methane Pledge and the Commitment to End the Use of Coal as an energy source.

They also converged on the assessment that the first week was one of commitments and statements of intent, highlighting the leading role that forests took on in the climate talks. Among the commitments signed at this stage is the Declaration on Forests, endorsed by more than 100 leaders, including governments and companies, pledging to end and reverse deforestation by 2030, with the allocation of resources – a total of US$ 19.2 billion – for initiatives in that direction. The leading global companies in the commodities sector also signed a joint statement, promising to end deforestation associated with the production and marketing of products such as soy, palm oil, cocoa and cattle.

Izabella Teixeira highlighted Brazil’s adherence to all commitments being negotiated at the COP as a positive aspect, such as the Declaration on Forests, the Global Methane Pledge and the Commitment to End the Use of Coal as an energy source. For her, who was responsible for designing the Nationally Determined Contribution (NDC) made by Brazil in 2015 in the Paris Agreement, it seems like the Brazilian government is reassessing its positions regarding COP matters. On the other hand, if during the first week negotiations were more technical in nature, in the second, the debate gained political dimensions, as ministerial meetings were held. And civil society, she said, will be keeping a close eye on such negotiations.

Samela Sateré-Mawé pointed out that the indigenous peoples’ conquest of spaces for speech was another positive aspect, given that the event was attended by a delegation of 40 indigenous people from all Brazilian biomes, as well as young people from all over the country, especially women. She mentioned how the Brazil Climate Action Hub became a relevant meeting point for COP, attracting the attention of people from all countries and standing as a welcoming place for Brazilians, particularly indigenous people. This mobilization contrasts with the international perception regarding the Brazilian government’s actions on this issue.

In turn, Ana Toni said that one of the highest expectations for the second week are the negotiations for implementing two articles of the Paris Agreement: Section 6, which addresses the creation of a global carbon market and Section 13, which establishes mechanisms for transparency under the Climate Summit. And all stressed what will truly matter in the future: how the pledges made by the parties in this COP edition will be implemented. For them, there is no more time to lose. One must not leave any measures agreed upon to the next COP edition.

Held in partnership with the Brazilian Center for International Relations (CEBRI) and the Institute for Climate and Society (iCS), the plenary session is available at CEBRI’s YouTube channel.